Shortly before Christmas, Stefani proposed that we do a couple of smaller projects that could become Christmas presents.  One was a pin board, another was a Christmas-themed fabric wreath.  I ended up being a bit after the fact with the pin board and making it at home (because I’d got in a mix-up over which session we were doing it in), but managed to be in sync for the wreath (which was awkward because it was the week that pretty much all of us forgot to bring along cutting mats and rotary cutters!).  Digging through my stash, I realised that I had a surprising amount of Christmassy fat quarters, though I’d bought a few more just in case.  I like Christmas fabric a lot (it’s usually so sparkly!), but I also find it a real challenge in terms of design because it’s SO Christmassy.  Anyway.

The wreath was easy and fun to do, essentially just tying strips of fabric onto half an embroidery hoop.  Stefani came up with some shimmery organza that I eagerly added to my pile of strips and another Quilt Clubber kindly donated me some scraps of white fabric with spriggy green bits on.  I ended up with a pleasing distribution of fabrics around the ring and my strip length of 7-8″ proved to be a good choice.  The wreath was trimmed with chunky cinnamon sticks, brass bells, Fimo stars and a dangly decorative citrus in the middle.  I should dig it out of the loft and take a photo.  The best bit was a comment from my aunt, “What a lovely wreath!  It looks like something you might make, Heulwen!”  I ‘fessed up that indeed I had made it, and proceeded to explain how to make it so that she could replicate the technique with her Brownie pack.  It’s the perfect project for craft-minded children, I think.  Simple but very effective.

With the wreath done, I had quite a bit of left-over Christmas fabric (I’d only used about half of each fat quarter I had) and a desire to do something with it.  Since I started doing a lot of patchwork, mum has been very interested in my projects and has been asking me if I would make something for her.  Looking at my left-overs, an idea formed.  I often use Google image search for inspiration and to see what ideas other people had, and had come across a very attractive hexagonal pattern made with jelly-roll strips: 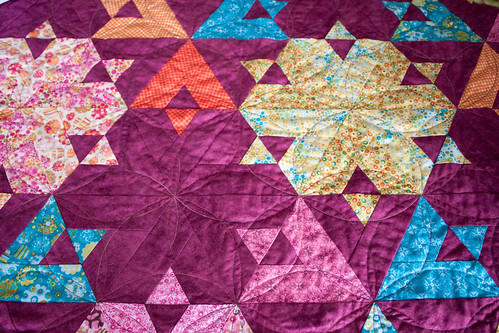 (Screw you, Flickr.  You wouldn’t believe how much of a pain in the arse it was to insert that photo “properly”.  Won’t be bothering with THAT again…)

Anyway.  Cool, huh?  I had some mostly red, some mostly green and some mostly cream fabric available, and decided to see if I could replicate the above design with narrower strips (since I wasn’t at all sure how much fabric I would need) to make a table topper for mum. I downloaded a triangle grid from the internet and played around with it in Paint to get an idea of a design, but realised that the only way to find out how big I could make the topper was to make as many triangles as I could and see what I ended up with.  It turned out that I could make 12 and a bit triangles (three coloured, three cream counterparts) from four 1 1/2″ x 22″ strips by using a sort of triangular log-cabin method and some careful cutting.  One of the first lessons I learnt when making the triangles was the importance of chirality.  As a chemist, it’s pretty obvious really – to ensure that everything matches up nicely, all pieces need to be assembled in the same order and direction.  As I assembled more triangles and got a better feel for how many I would end up with, I settled on this arrangement:

My triangles were laid out in rows and then sewn together into strips.  Then the strips were joined, the thigh-bone connected to the knee-bone et voilá!

This is the first item I have completely finished all the patchwork, quilting and binding of.  It’s quilted in the ditch (or as close as I could get to in the ditch – some of those corners are rather skew-whiff), and I made the binding out of a remnant of pinecone patterned fabric left over from the Wedding quilt.  I am very proud of it, and I really love how it looks a bit reminiscent of Poinsettia (one of mum’s favourite plants).  In a break from the image I found, I used two different fabrics for the red and green triangles, keeping the smaller designs for the smaller piece and the larger designs for the longer piece.
I liked the look of this pattern so much that I decided to do another for my friend and his wife in London:

I’d shown him the original image and he’d commented on the resemblance to snowflakes and that it would look good in blue and white.  In a separate conversation he’d also mentioned a fondness for paisley.  Well, I happened to have blue and white paisley fabric, so I couldn’t resist putting this together for him and his family for Christmas!  It was definitely quicker than the one I did for mum because I had a better idea of what I was doing.  The top also lay flatter when it was pieced (mum’s was a little wriggly and required some persuasion to make it lie flat for quilting).  This was a good thing because as mentioned I still don’t have my own basting pins or walking foot – I’d borrowed both from Cath at Quilt Club and had to make do with the pins still left in mum’s version.  The blue version was also quilted in the ditch (FMQ is a bit beyond me at the moment), but I’d ordered some synthetic “metallic” look thread in a sort of iridescent white to give it a subtle shimmer.  It was a right pain in the bum to sew with because it kept breaking as I quilted.  The only solution I could come up with was to reduce the thread tension a LOT, which helped a bit, but I don’t know if that was the right thing to do.

I decided to make a shopping bag for my sister.  The pattern came from the same book as the pinboard (which I made for my brother-in-law, but unfortunately have no photos of).  It was the first time I’d made such a thing and the instructions weren’t as clear as they might have been, so a certain amount of pondering and swearing was required when it came to the construction:

The bird fabric was one of several really fun designs I found in an offcuts box in a fabric shop in Machynlleth and was simply too cute to leave behind.  The brown fabric at the bottom (and also sides though you can’t see them) came from the same place and also has a bird theme.  The lining is fabric from mum’s fabric stash (I had to get my hoarding genes from somewhere!) and the dark blue bird was appliqued on with bondaweb and zigzag stitch.  I modified the design a bit by adding a magnetic snap and adding a rectangle of sturdy, double-thickness cardboard covered with lining fabric to give the bottom a bit more structural integrity.

The very last things I made were a return to and modification of a personal Christmas tradition – luxury chocolates presented in hand-made boxes.  Previously I’d made them out of craft card decorated with relief paints in metallic colours, little deco balls and plastic “jewels”.  This year, after watching the Christmas Special of The Great British Sewing Bee, I was inspired to try making some pyramidal boxes covered with fabric and held together with ribbons.  I also had the perfect thing to decorate them with – little 5-pointed stars that I’d made from Delica beads.  And it was the best use for some of the Christmas fabric I’d bought but decided was too big a design to cut up into fiddly little patchwork bits.  The inside was lined with more of the cream-and-gold-swirls fabric used on mum’s table topper.

I made one for myself, too, because I happened to have four stars and I wanted to have an “ooops” box to practice on!  (And because no one ever makes ME handmade chocolate boxes!  *sob*)  Mine’s the one on the right with the holly.  The star was the first one I made with Delicas and I ran out of the colours I was using part-way round.  If I do these again, I will NOT use black card!  And I’d probably use different glue.  And not doing them in a rush would probably help, too (though that’s ALSO become a bit of personal Christmas tradition – there’ve been a number of Christmases that I’ve been up until the wee hours decorating and assembling boxes).  But they looked cute and had just about enough room for four delicious chocolates from the posh chocolate shop in Narbeth.  🙂