Cath from Quilt Club has been involved with Project Linus for some time, and recently became an organiser for our area.  In a show of solidarity and team spirit, most of Quilt Club showed up to attend her first Project Linus Sewing Day last Thursday.  We were told to turn up armed with our sewing machines only, everything else (including thread) would be provided.

She wasn’t kidding!  There was a long table crammed with baskets full of enticing fabrics (why are other peoples’ scraps always more interesting?), wadding, loads of reels of thread (though I ended up using my own because I prefer to piece with cotton).  As well as familiar Quilt Club faces, there were several people I hadn’t met before, including the lady who runs night classes in PW&Q at the local college.  Everyone was very friendly and keen to quilt up a storm of Linus quilts!

I plunged in and snaffled some fun-looking fabric of bears in squares and decided to frame them in log cabin blocks.  Because the bears seemed to be both boys and girls and I wanted to use both in my quilt, I decided to be firmly non-gender-specific and chose a mixture of greens and yellows as the two colours for the cabin.  I cut out 15 bears and a pile of 2″ strips and set to with a will.

It was very liberating to be so relaxed about fabric choice and placement, though I did my best to mix up the arrangement so every block was different.

Seeing everyone else’s concepts taking shape was a lot of fun too.  I didn’t quite manage to finish my blocks to my satisfaction on the day, but since I’ll see Cath at Quilt Club next Thursday, I decided to take my blocks home (along with some extra strips) to finish them off.  After considering the size of my blocks and the style of fabric, I decided that it would be preferable to make two smaller baby quilts rather than one larger one, so I turned nine bears into a square quilt top and the other six, plus a checkered border made of left-over strips, became a more rectangular one.

I’m still deciding whether to do a bit of a border on the square quilt and a top+bottom border on the rectangle, but I’m very pleased with these little tops, I think they came out well and were fun to make.  I’ll hand them to Cath on Thursday for her to quilt, along with whatever else I come up with that uses up the remaining strips and squares.

For a bit more eye candy, here are some of the quilts made by other people on the day:

Linking up with the Fresh Sewing Day party at Lily’s Quilts: 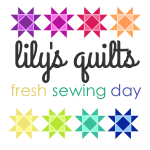